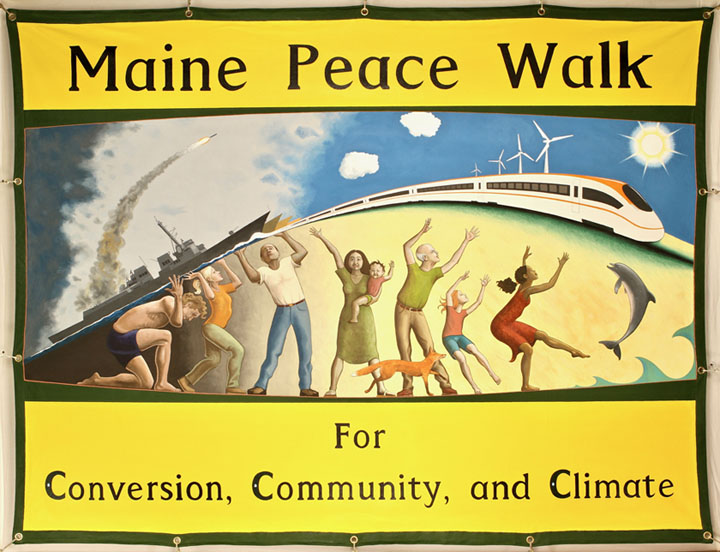 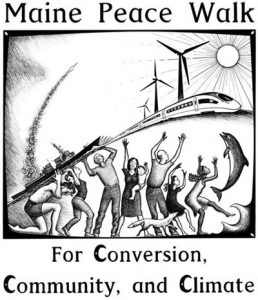 The sixth Maine Peace Walk for Conversion, Community and Climate will be from October 13-21. This year the walk will largely be centered in Bath and concentrate on the serious need to convert Bath Iron Works (BIW) to peaceful and sustainable production.

As the planet heats up, the oceans warm and acidify, and Arctic ice melts we witness the release of methane that only accelerates the global warming problem. The response of the government has been to unleash geoengineering of the sky which further exacerbates the problem. In addition, the US military has the largest carbon footprint of any organization on our Mother Earth. Waging endless war consumes massive amounts of fossil fuels and lays waste to significant environmentally sensitive places on the planet – particularly the oceans.

If we have any hopes to secure a future for the coming generations then we must immediately begin the conversion of the military industrial complex to environmentally appropriate renewable energy systems. What could be more important at this moment?
Studies at UMASS-Amherst Economics Department have long shown that producing commuter rails systems, offshore wind turbines, solar and tidal power would in fact create more jobs at facilities like BIW than we currently get building warships. Spending on education, health care, and other social programs also creates more jobs than does military production.

But if the environmental and peace movements don’t make the demand for conversion it will never happen and our children will be left with the devastating consequences.

While in Bath during October 13-21 we will hold morning and afternoon vigils at BIW to bring the conversion message directly to General Dynamics (owns BIW) executives and shipyard workers. During each day we will go door-to-door across Bath to drop flyers at every house and business in the community. During the evenings a public program, film and music will be featured.

We will have a special guest during the peace walk from Jeju Island, South Korea where a Navy base has been built in a 500-year old fishing and farming village that worships their relationship to nature. Gangjeong village was torn apart to construct the Navy base but for the past 10 years daily non-violent protests have been held and they continue to this day. The warships built in Bath are already porting at this new Navy base.

We welcome everyone to join our peace walk for an hour, a day, or more and to help in any way you can. Accepting our present condition of endless war for fossil fuels is a dead-end street that if not reversed will lead to our collective demise. We must have a conversion that begins with our hearts and extends to the timely task of totally reorienting our national production system.