Invited, One and All; August 6th is Hiroshima Day 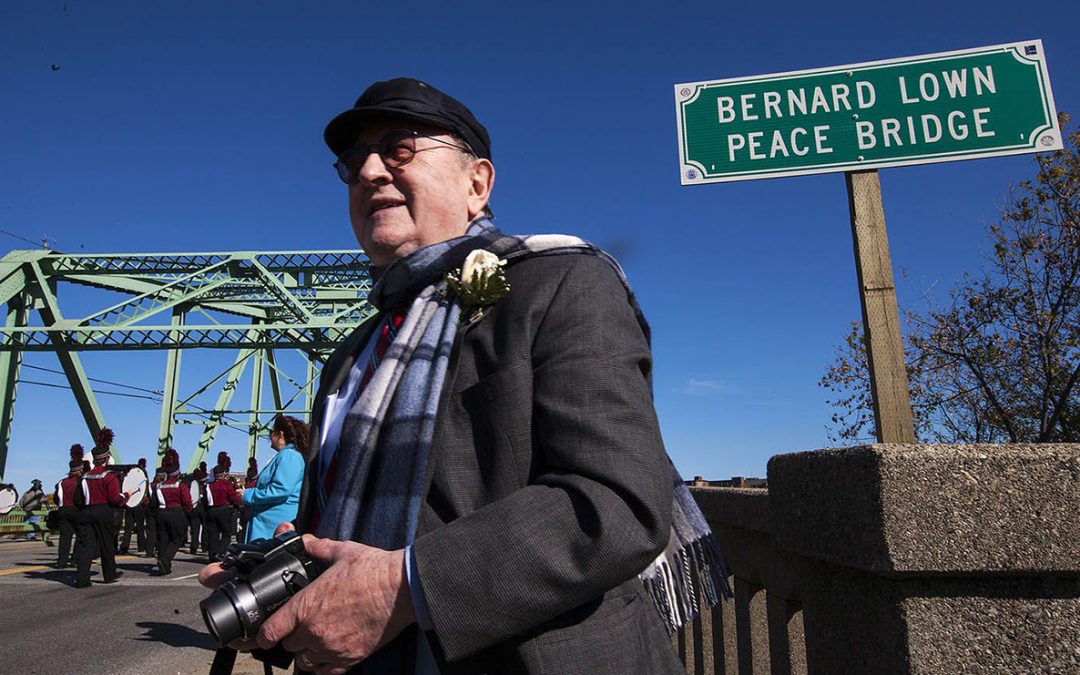 Please join us in recommitting to no-nuclear-war and commemorating Bernard Lown, the Nobel Prize-winning namesake of the local Bernard Lown Peace Bridge. Observances will take place in Lewiston, Maine on August 6. Be at the Gendron Franco Center on Cedar Street. The time is 10:00 AM. That day marks the anniversary of the U.S. nuclear attack on Hiroshima, Japan in 1945. It was the first time.

On completion of the program at the Center, we move to the monument honoring Dr. Lown at the nearby Bernard Lown Peace Bridge. Further observances there ending at 11:30 AM will finish the day.

Lewiston Mayor Carl Sheline will offer welcoming remarks. Auburn resident Allen Harvie will be presiding. We’ll hear from former Lewiston Mayor Laurent Gilbert. He will recall the contributions of Dr. Lown and the campaign in 2008 to rename the bridge in Dr. Lown’s honor.

Doug Dransfeld MD, head of the Maine chapter of Physicians for Social Responsibility, will speak of the urgency of eliminating nuclear weapons and about his organization’s contributions to that cause.

Ted Walworth MD, who has experience working with Doctors Without Borders, will reflect on the public role of physicians advocating for world peace. Denny Dreher and Fred Brodeur will speak on behalf of Pax Christi Maine.

The organizers for the August 6 event are Maine Veterans for Peace, Peace Action Maine, and Maine chapter of Physicians for Social Responsibility. PeaceWorks of Brunswick, Maine and Pax Christi Maine are co-sponsors.

As a reminder: Dr. Lown, who died in 2021, was the famous cardiologist who invented the DC defibrillator and who, with Soviet cardiologist Eugene Chazov, co-founded the group International Physicians for the Prevention of Nuclear War in 1980. (See https://www.ippnw.org/). Under the auspices of that organization, physicians worldwide joined in campaigning for a moratorium on nuclear weapons. Drs Lown and Chazov together received the Nobel Peace Prize in 1985.

Bernard Lown immigrated from Lithuania with his family, and studied at Lewiston High School and the University of Maine before entering medical school. He was a co-founder in 1961 of Physicians for Social Responsibility. He served as that group’s first president.

Former Mayor Gilbert, a member of Florida and Maine Veterans for Peace and friend of Bernard Lown, has guided arrangements for the upcoming event. He, with Allen Harvie, led efforts in 2008 to recognize Bernard Lown and carry out Allen Harvie’s idea of renaming the former South Bridge to honor Dr. Lown. Involved in that project were the Lewiston and Auburn City Councils, the Maine State Legislature, and former Governor John Baldacci.

Doug Rawlings, an organizer of the gathering this year on August 6, recalled recently that, “When we formed Veterans for Peace in 1985 here in Maine, we were, and still are, thinking of the children whose lives are impacted by war. Many of us, as veterans, looked into the eyes of these children. On August 6, 1945, the bomb was dropped on the children of Hiroshima at 8:15AM, just as they were settling into their classrooms.”

According to Rawlings, “peace cranes” will be available to people attending on August 6. These origami paper cranes represent the story of Sadako Sasaki, a Japanese child-victim of the bombing. They have become a worldwide peace symbol.

Fair warning: organizers require that attendees wear protective facial masks inside the Gendron Franco Center. They will be provided.