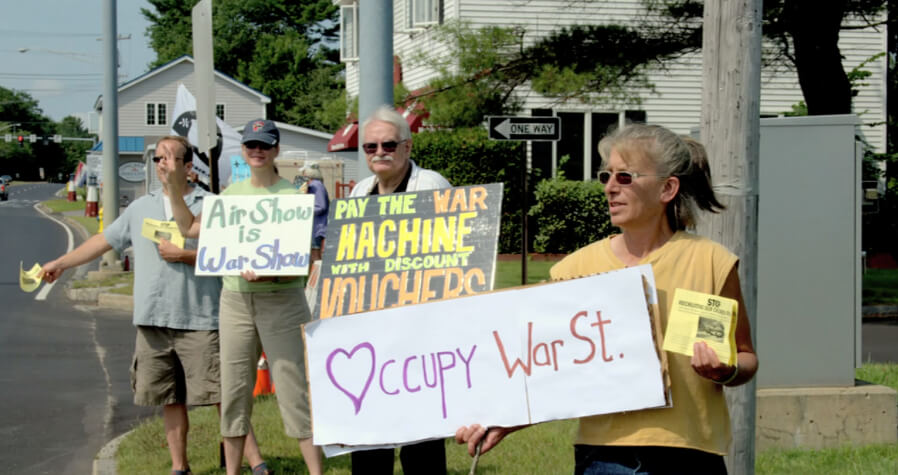 Air Show Protest on August 25th and 26th at Brunswick Landing, in honor of Tom Sturtevant

On Saturday, August 25, 75 activists from around Maine joined our peace march and vigil in Brunswick at the Air Force Thunderbirds airshow.

We walked from Bowdoin College to the former Navy airfield and then stood with signs and banners while the much smaller crowd than normal drove into the show.  One policeman told us that only 1/4 of the crowd that came in the past had ventured in this weekend.  The likely reason is that when the Navy base was still open the airshows were free to the public.  Now that the base is closed, and a redevelopment agency is running the place, they are charging $20 a head to enter.  Since most of the folks going to these airshows tend to be working class they are being priced out of the equation.

On Sunday morning, August 26, 14 of us (mostly members of Veterans For Peace) bought tickets and went inside the airshow to carry the powerful banner made by Maine artists Natasha Mayers and Nora Tryon and to hand out flyers.  Six of us were prepared to risk arrest while the others had the roles of taking photos, video, and handing out flyers.

Much to our surprise those running the airshow did not try to stop us when we unfurled the banner in front of the biggest plane on the tarmac, a B-1 bomber flown in from Texas for the occasion.  Since they left us alone we spent the next hour or so walking back and forth through the large staging area giving the crowd an up-close view of the banner.  Our leafletting team trailed along with us and kept offering literature to the public.

We got a few hostile comments (“get a job; you can only do this because the military protects you”) but many more actually took the flyers.  Two times I saw men in military uniforms request a flyer.  Finally after the first hour of walking through the crowd we went back to the B-1 and stood in the shade under one of the wings.  It was then that several security men came up and ordered our photographers to stop taking pictures of us in front of the plane – a “Homeland Security” matter they said.  When our photographers challenged them to explain why the general public was allowed to take unlimited photos of the bomber, they were told it was because of what we “would be doing” with the pictures.

It was a great action, one that Maine VFP member Tom Sturtevant wanted to do last year but we weren’t able to get it together at the time.  So this year we were determined to take a banner about military recruitment (Tom’s favorite issue) into the airshow.  We tip our caps to you Tom.  Presente!