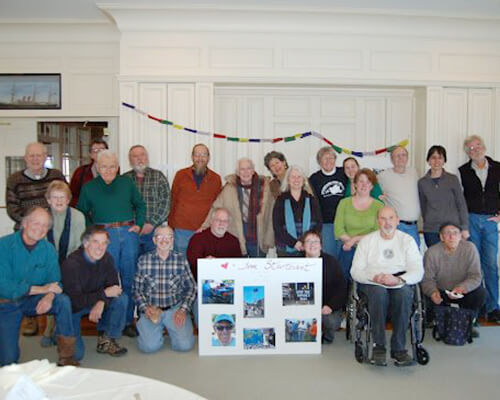 Friday night:
Potluck supper and sharing of Tom Sturtevant stories, filmed by Eric Herter. Video will be available for $5, contact him via email to make arrangements at imagesvietnam@yahoo.com

Bowling: Team I (The Hotshots) led by Richard Clements won both games against Team II (The Coldshots).

Saturday at The Summit:
Nicole began things with a candle lighting to remember Tom. Peggy created a photo display of Tom from many different protests.

Personal Sharing:
Tom is a great loss to us; Concern about future of chapter and movement; Got to do some recruiting of younger vets; Possibility of Iran attack outrageous; Occupy movement hopeful; Dovey’s son just out of Army; Panetta admits Iran does not have a bomb but 70% of Americans think they already have it; Need to find social ways to interact with young folks who are unlikely to come to meetings with us older folks; Dan just finished latest national VFP newsletter; Eric makes videos and is looking for good ideas; Surest path to peace is to become at peace with yourself first; Need to be in streets now on Iran before it is too late; Need a new treasurer soon; We are not the great country people think we are; Need focus and stay determined; Doug now on Nat’l board and is impressed with what is happening; Stay optimistic and keep building relationships with younger people; Grateful for way Occupy has been highlighting the neglect of social infrastructure across the country; Work at BIW and life changed when U.S. invaded Afghanistan and Iraq with DU – working to slowly change people’s minds at work; Inspired by Chris Hedges; Need to focus on few things that we can plan and carry out; Suggest changing name of chapter to Tom Sturtevant; Need to form a recruitment committee; Need a coordinating committee that frequently meets (even via email) to keep everyone in the loop; Maine Share is an important funder for us; Attack on Iran will result in counter attack on U.S. and Israel; Bring our war $$ home; U.S. trying to provoke a reaction from Iran.

John D’Anieri facilitation:
What should/can we do? How should we do it?

Our work in 2012/13 will include: Chapter make a statement against Iran war and meet with editorial boards of all papers; Describe what VFP is and does throughout Maine using media and public events, develop committee to send news releases; Peace Education curriculum and process for counter-recruitment in schools, train trainers to go into schools; Organize diverse statewide conference connecting the dots that will bring in new people and revitalize VFP; Planning committee would include functioning membership committee; Do direct actions – particularly at August 24-26 Thunderbird air show in Brunswick; Keep in mind the November elections impact on these plans; PTSD confab will be wrapped into new committee structure and will be discussed by the new facilitators.

Membership in these committees is open to all.

Facilitators will meet at Rita’s home in Gardner on Feb 13 at 6pm to divide responsibilities of committees. Bring some food to share. (Suggest facilitators bring list of what they see their committee working on.)

John D’Anieri is willing consult with committee chairs – 233-6125. We will have John come back in mid-year to do an evaluation and tune-up of our planning process.

Kristina will write up a proposal to put our accounts on an on-line financial operation (Mint.com) that can be checked by chapter officers. Kristina nominated Dovey to take over Treasurers job. Peggy suggested we move our account to a local credit union so we are not using a corporate bank and we urge all Maine VFP members to do the same thing in the spirit of the Occupy movement. (In the last 90 days 5.6 million citizens have moved their money out of the big banks across the nation.)

Dovey Balsam was elected to the position of Treasurer. Kristina will work with her for a while for a smooth transition.

Honoring Tom:
Proposal to change name of chapter to Tom Sturtevant passed unanimously. Peggy will contact the family to let them know.

Tree proposal – Common Ground Fair $500 plaque on tree in Tom’s honor. Social & Political action folks at MOFGA have already raised the funds. Stan Lofchie sent word that he did not support chapter donating to tree fund but would rather see us honor Tom by donating to Occupy movement. Bruce agreed with Stan saying he preferred a donation go toward active organizing in an area that Tom cared deeply about. Membership decided to send $125 to MOFGA toward maintenance of the tree. The group will explore making a larger donation in the future toward project(s) that carry on Tom’s work.

Chapter Management:
Officers and board – new nominating committee is needed.