How the first chapter Veterans for Peace was founded in Maine 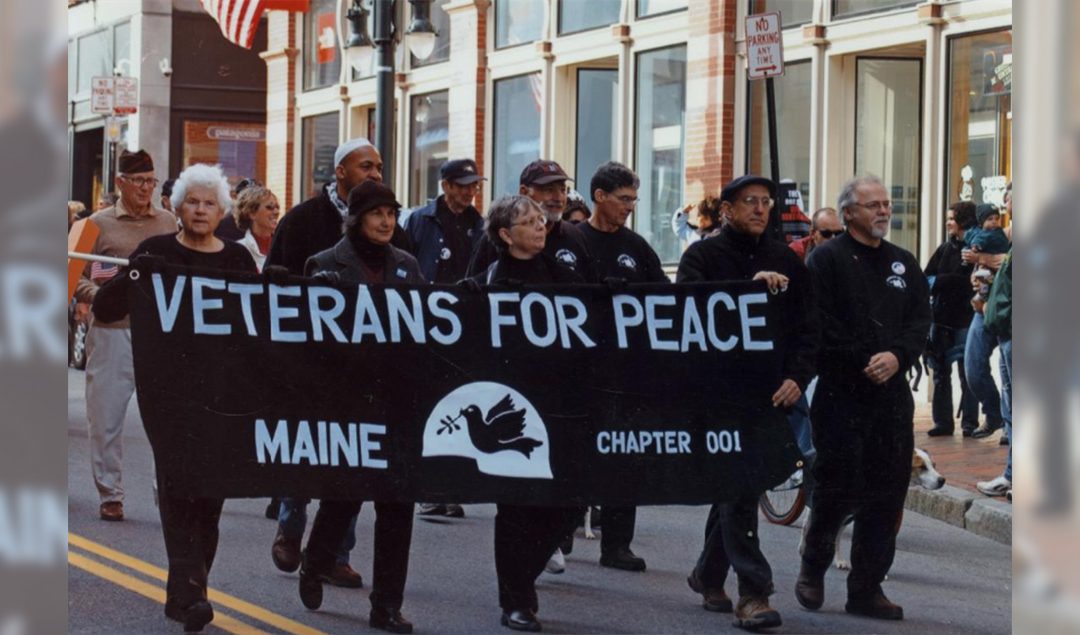 A story by Doug Rawlings from 1985

I was involved with five others in the founding of Veterans For Peace in 1985 here in Maine. We are now an international organization with over 130 chapters around the country as well as chapters in London, England; Shannon, Ireland; Tijuana, Mexico; Hanoi, Viet Nam; and Okinawa, Japan. We have over 4,000 members. To get the historical, factual perspective of our first years, you should turn to Jerry Genesio’s THE FIRST TEN YEARS. But let me tell you what it was like from my point of view.

First off, I was drafted in 1968 and eventually ended up in the Central Highlands of Vietnam with the 7/15th artillery from July of 1969 to August of 1970. After getting out of the army, I kicked around Boston and then Seattle and then back to Boston, eventually earning my Masters in Teaching English. I taught high school in Boston and in Maine and eventually ended up teaching at the University of Maine at Farmington. Throughout the early years of this journey I was constantly plagued by my experiences in the military. Somehow I wanted to turn what I felt to be an overwhelming negative slice of my life into something positive.

So my first response, in the early years of living in Boston, was to join the Socialist Workers Party, a group whose allegiances to the antiwar movement were strong, but, in the end, I found them too doctrinaire. So I kept on searching, flirting a bit with Vietnam Veterans Against the War, but still looking for a peace group as opposed to a group just dedicated to resisting a particular war. Eventually I began writing about my experiences and then my thoughts about war in general.

When 1984 came around I had pretty much given up on my dream when I happened to hear a presentation by Jerry and Judy Genesio about their experiences in Nicaragua as members of Witness For Peace. At the end of their remarks, Jerry mentioned that he was looking for veterans to form a peace group. We connected. And started to work. “Work” back then involved face-to-face meetings, phone calls, and, finally, typewritten letters to the editor. Our first convention was held in the basement of Woodford’s Church in Portland with about fifteen in attendance (last year 500 members attended our convention in San Francisco). Finally, we crafted a mission statement, some guidelines, and a statement of purpose. Essentially, we wanted to abolish war, and we wanted to do that non-violently. We wanted to use our experiences in the military to curb how our politicians were using our military forces to advance policies antithetical to what we had learned as true “American values.”

This unique perspective — we are the only veterans group calling for the abolition of war — positioned us on a very fine line. Some consider us to be against “supporting the troops,” while others think that we are too conservative in our particular advocacy for certain peace initiatives. And, contrary to many opinions from the military community, we are not an organization of absolute pacifists. Nor, as some of our peace action colleagues fear, are we apologists for the current worshipful mindset that turns every soldier into a “hero.” If we are anything, we are a group of people who hate groups. A bunch of non-joiners joined together. Yet our membership continues to grow. 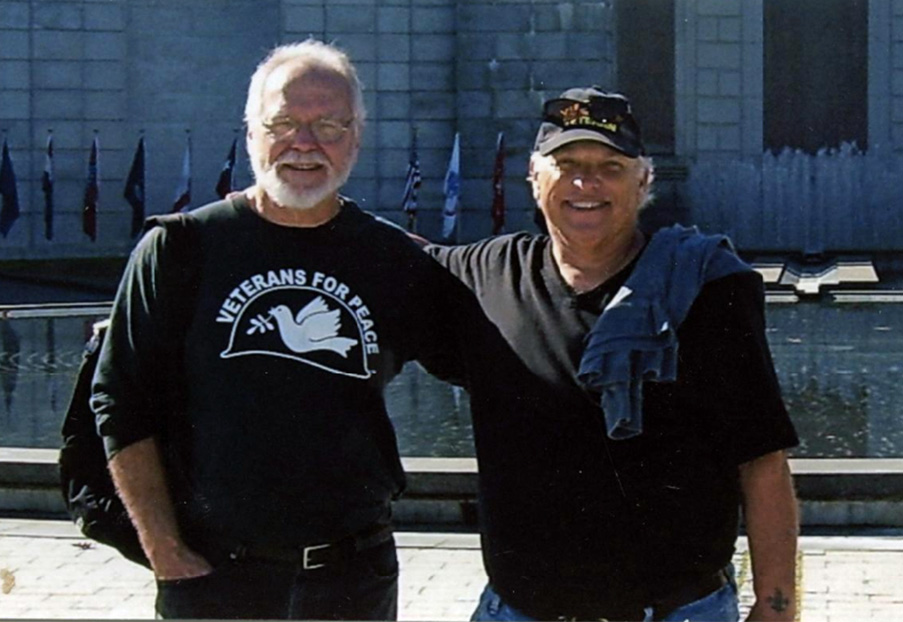 Within a decade of our founding, we had over one hundred chapters across the country (today we have 130 with a fair number of “at-large” members as well) and had gained NGO status at the United Nations. Two years ago we had to change our charter to become an international organization because veterans from other countries’ armies found our mission statement resonating with them. As mentioned above, we have chapters in London, England; Shannon, Ireland; Hanoi, Viet Nam; Okinawa, Japan; and Tijuana, Mexico. Some of these chapters are chiefly populated with American ex-pats, but there is a trend afoot here. Veterans are veterans, no matter what their country of origin is. Our message and our methods are resonating far beyond our national borders. And, oh yes, by the way, when we formed VFP in 1985, we refused to go the way of all other military-related organizations to relegate women to “auxiliary status.” Hence, we have a growing number of women veterans joining us although we do suffer from the aging process. Many of our members are in their later years; here we have to be patient and allow our younger veteran brothers and sisters to come to us as they become more acclimated to civilian life. It took us awhile to get where we are, so we should cut them some slack as well.

Probably the second most important institutional move on our part, after becoming an international body, was to announce a major change in our reach by adopting the banner of “PEACE AT HOME, PEACE ABROAD.” We recognize that the insidious militarization of society in our cities and states, in our schools and in our political institutions (despite the fact that under one half of one percent of our citizens serve in the military), takes its toll not just economically but also spiritually. Our infrastructure crumbles as our souls wither. So we veterans say “enough.” We must re-direct our domestic priorities as we must erase our imperial designs abroad. We have to stop colonizing our children and our aged as well as those living outside our nation state. We have to withdraw our military bases abroad and re-humanize our police forces here at home.

Once we took on this new perspective the times caught up to us. Our national office is in St. Louis, Missouri, right next door to Ferguson. We were there when the Black Lives Matter movement came into being. We were there as allies for communities nationwide suffering directly under the injustice of overly-militarized police forces. And our chapter members in Boston were there to stand between the police and the upstart, youthful Occupy Movement when the police moved in to crush their freedom of speech rights. And we have been beside our Muslim brothers and sisters as Islamophobia sweeps through the nation. We are also fighting tooth and nail against the privatization of the VA system. Of course we are at the front lines of the struggle of Korean people against the military overreach of the Pentagon, as well as supporting our English compatriots as they battle their government’s neanderthal tactics. And we have linked arms with the Palestinian people as they fight back against the Israeli forces that are armed to the teeth with American armaments. Finally, we are standing with our Mexican fellow veterans who have been exiled from our country after serving in our military misadventures in Iraq and Afghanistan. They joined up with a promise of citizenship as a just reward; now they are being deported for the most trivial of reasons.

On and on it goes. We are in this struggle for the long haul. We are veterans. And we are for peace for all the planet. In that regard, we remind people that the Pentagon is the largest single polluter in the world. By reining in their exploits, we will greatly reduce the devastating climate change patterns that are plaguing the world. And we hold true to the principles of Gandhi and Martin Luther King, Jr. that espouse the use of non-violence to achieve our ends.

When Henry David Thoreau was in jail protesting the Mexican War, he was visited by Ralph Waldo Emerson, who asked him: “Henry, what are you doing in there?” To which Thoreau replied: “Ralph, what are you doing out there?” We have to respond to those “Emersons” who ask us why we do what we do. Our answer is that we are finally now “serving” humankind. We are no longer being used by corporate executives and greedy politicians. So why not join us? Why are you still “out there”? Come on in.