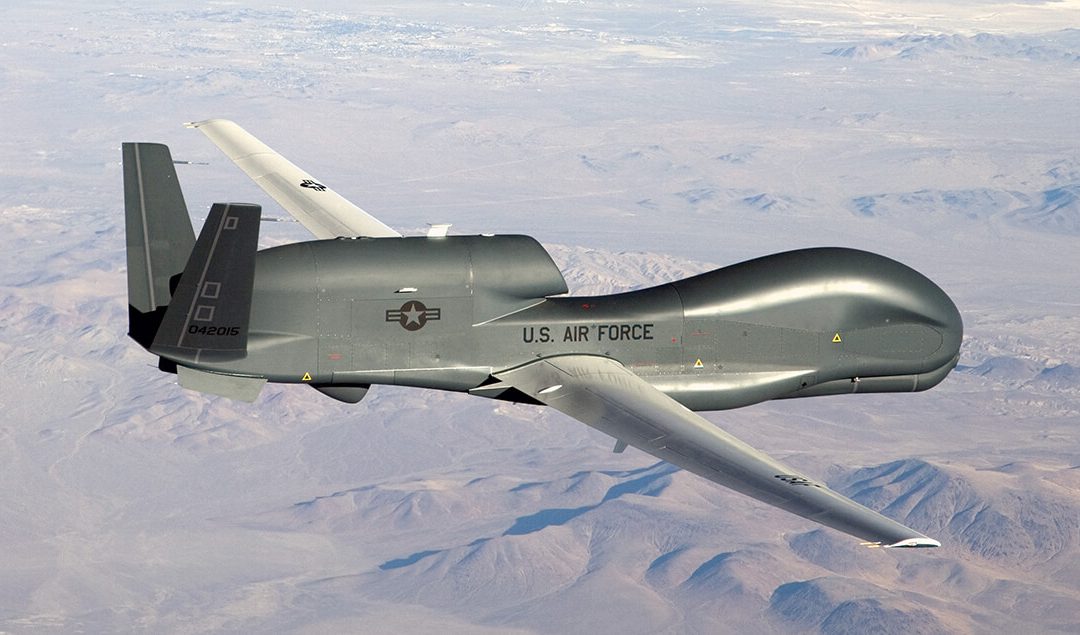 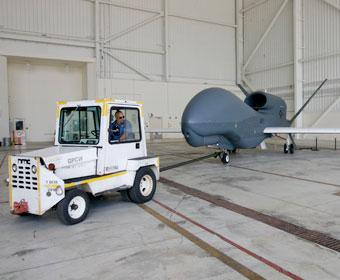 Northrop Grumman personnel ready a visiting unmanned Global Hawk aircraft for takeoff at Brunswick Naval Air Station on Friday. A pilot from Patrol and Reconnaissance Wing 5, which is based out of Brunswick until next spring, navigates the craft remotely from Patuxent River (Md.) Naval Air Station. The Global Hawk’s approximately week-long stay in Maine represented the first time one of the military’s vaunted drones had ever landed or taken off from a New England location, according to a Wing 5 spokesman.

BRUNSWICK — The recent presence of an unmanned military aircraft at Brunswick Naval Air Station generated disapproval among local peace advocates, who decry any future testing of the “drones” here after the base closes in 2011.

However, a top state official said Monday that while civilian redevelopment leaders haven’t taken a formal stance on unmanned aircraft, development of drone technology in Brunswick could be used for peaceful causes as well.

Local conversation about the remote-controlled aircraft — which now play a key role in the U.S. military strategy to combat the Taliban and al-Qaida in Afghanistan — erupted anew last week when a Navy Global Hawk reconnaissance plane touched down at the Navy base. The craft is piloted by a member of the Brunswick-based Patrol and Reconnaissance Wing 5 from a location in Maryland, and was in town briefly as part of a training exercise and for display during a farewell ceremony Thursday for Wing 5.

The final P-3 Orions associated with Wing 5 will take off, never to return, in early December as the Navy works to incrementally vacate the base by mid-2011. The Midcoast Regional Redevelopment Authority (MRRA) is the civilian organization charged with planning for the reuse of the 3,200-acre base property after the Navy leaves.

Some in the local community of peace advocates hope those reuse plans don’t include more of the unmanned military aircrafts, which the base airfield is equipped to accommodate as a testing or development facility.

Rosalie Paul of Georgetown is a member of Greater Brunswick PeaceWorks. She said Monday that U.S. military drones have been responsible for civilian deaths overseas.

“People are dying right and left, and we want nothing to do with technology that encourages that,” Paul said. “We may need jobs, but our economy needs to focus on sustainability and energy and light rail. We can be doing that kind of thing at BNAS and (Bath Iron Works). This war mentality is not sustainable. We need jobs that are not poisoning the planet and jobs that are not killing people.”

Bruce Gagnon of Bath is the coordinator for the Global Network Against Weapons and Nuclear Power in Space. He told The Times Record on Monday that drones are the focus of the group’s “International Keep Space for Peace Week,” which will run Oct. 3 through 10.

“Locally, we’ve been concerned about the things we’ve been hearing about the possibility of using the base property as UAV (Unmanned Aerial Vehicle) flight space after the base closes,” Gagnon said. “Among the peace community all over the state, there’s been a lot of talk and concern about this Brunswick connection, the implications for our community and how we’d be right smack in the middle of aggressive warmaking. When we start introducing robotics and drones, it makes it easier for us to go around killing people. It’s the real ethical question of our time.”

Gagnon said his organization has turned to a November 2007 study by the University of Massachusetts economic department, which argues that, in the pursuit of job creation, the government would be better served spending money on the production of transportation infrastructure and “green” industries.

John Richardson, Maine’s commissioner of economic and community development, is also a member of the MRRA board of directors and a Brunswick resident. He said the authority has yet to take a stance on UAVs, but pointed out that unmanned aircraft can be used for non-military purposes.

Richardson noted that the Global Hawk that visited Brunswick last week is a surveillance craft, “which is different than the drones that drop bombs.”

“I think it’s fair to say that MRRA hasn’t taken any position on the kind of drones that are the subject of some debate, but we would have to have that discussion in the future if that type of opportunity were to present itself,” he said. “There have been some people who have contacted the authority, but there hasn’t been any serious discussion around UAVs. A lot of people talk to us, but does somebody have a plan that’s ready for serious review and implementation? A lot of people talk to us, but nobody has any plan that’s ready for implementation.”

“There are many adaptive uses of UAVs that could be very helpful to the nation and then to the world,” Richardson continued. “I wouldn’t cast out of hand UAV research or testing, because of the potential benefits to the nation in the areas of search and rescue, air and water quality, homeland security and even forest fire prevention.”