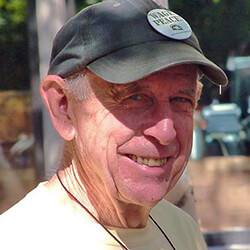 Veterans for Peace members are in deep mourning as one of our Charter members, former Chapter President and serving Board member, Tom Sturtevant, died on Saturday. To those in the peace community in Maine, Tom needs no introduction; indeed, Tom’s stature beyond our state’s borders and even our national borders is recognized by many who have struggled over the years against American imperialist designs and for world peace.

Our state chapter has stood on the shoulders of Tom Sturtevant for years. As chapter president, his quiet leadership and amazing doggedness in the face of adversity – neither red tape nor neo-conservative attacks thwarted Tom – made us a force to be reckoned with. Tom is the epitome of a non-violent direct activist. In line with our organization’s pledge to refrain from violence of any kind, Tom also took seriously our mission to “…act in the best interests of the group for the larger purpose of world peace.” Throughout the years, no matter in what capacity he served Veterans for Peace, we all knew that we could trust Tom to take care of the smallest details while still holding onto our grand vision of abolishing war. Tom reserved rooms, made banners, attended countless meetings in Augusta, stomped the pavements in Portland, always taking care of last minute arrangements while staunchly advocating for peace. He would sit in senators’ offices and representatives’ foyers until someone would hear what he had to say; as a Korean War veteran, he took it upon himself to keep our military’s complicity in the destruction of the Korean peoples alive in our collective memories, even as he fought against our military’s current immoral campaigns.

Many who are active in the peace community have memories of Tom as the stalwart nonviolent activist that he was, but those of us in Veterans for Peace will also remember him as the chapter’s unacknowledged wordsmith (he was too modest to publicly accept this role) and diplomatically gifted leader and mentor. Tom would sit through endless “discussions” of strategies and goals and then, quietly, bring whatever contention was in the room to a halt with exactly the right words. He was the master of cutting the Gordian knot. Here’s one example – in the early years of the Iraq War, our chapter was preparing for a major demonstration in Portland, showing our organization’s disapproval of the war. The city had put together a parade down Congress Street to “welcome home the troops,” replete with New England Patriots football players, bands, etc etc. How could we, Veterans for Peace, protest the war and still be seen as supporting the troops as individual human beings? How to do that in parade, in a fervently pro-war atmosphere? We wrangled about that for what seemed hours when Tom spoke up: “Why not just have a banner saying ‘Join Us’”? The bickering stopped on a dime. That was it. We did just that – and of course Tom designed, made up the banner, and paid for it – standing alongside the parade route, handing out brochures, and holding up Tom’s banner.

We could go on. And we will. We will hold Tom’s presence in our hearts for the rest of our lives. We will tell stories of his work; we will quote him; and we will hold firm to the message he unfailingly presented to the world: “the only way to achieve peace in this world is to act peacefully, forcefully, with dignity and integrity.” Those who knew Tom Sturtevant know that we are all better people for having known him; indeed, he is one of those few individuals who leave a legacy for those who didn’t even know him – the world is a better place for all of us because of Tom’s words and deeds.

We are deeply saddened and will miss Tom beyond words, but in memory of Tom’s presence, we will not let Tom pass in silence. Joe Hill famously urged his friends – “do not mourn; organize!” We owe it to Tom to continue his good work. We are stronger because of him, and we will do what he bade us to do – work to abolish war; keep peace in our hearts, and make this a better world for our children and grandchildren. Rest in peace, good friend.