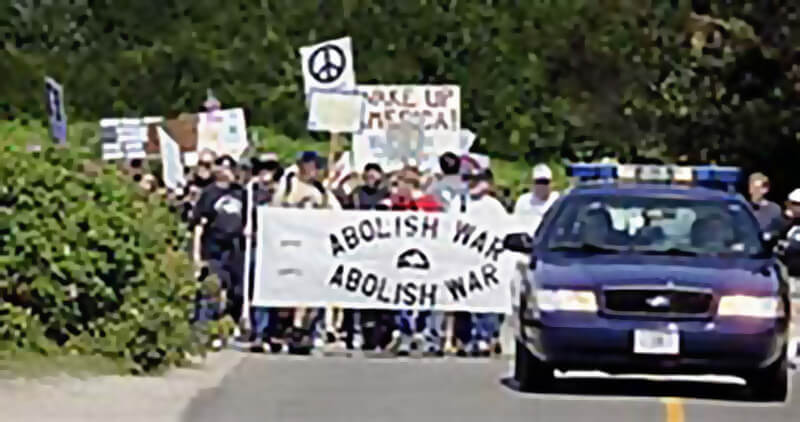 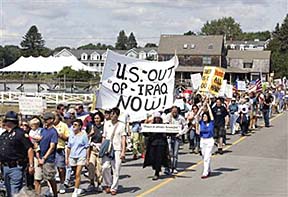 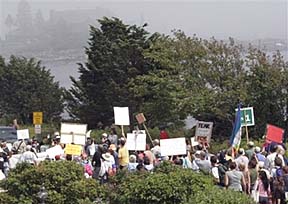 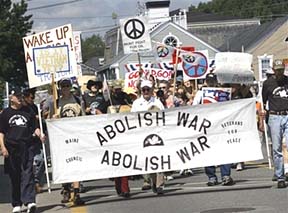 KENNEBUNKPORT, Maine, Aug. 26 — At every wedding, it seems, something happens not according to plan. Expect the unexpected, planners warn. But how many brides and grooms expect a peace protest?

That is what happens when the president shows up for the ceremony in the midst of a polarizing war. About 700 demonstrators marched past the seaside church where President Bush’s second cousin was to be married Saturday and then up to the checkpoint guarding the family summer compound to protest the war in Iraq.

The protesters left a few hours before the service so as not to disrupt the event itself, but they took advantage of the president’s visit to make their point and showcase their opposition to a war that polls show has lost most of the public’s support. Just as Bush found himself trailed to Texas by war opponents last year, now he has been dogged to his parents’ getaway on the rocky shores of the Maine coast.

“People wanted to speak truth to power,” said Jamilla el-Shafei, 53, a business owner in Kennebunk who helped organize the march. “What we wanted to do was let President Bush know we are the face and voice of a majority of Americans who are standing up to say, ‘Enough is enough; we want out of Iraq.'”

If Bush or the family was irked, they gave no public indication. “As the president has said, Americans are free to protest,” spokeswoman Dana Perino said. “Freedom of speech is a fundamental right in our country, which is fundamentally different to the terrorists’ plans for the world.”

Bush came to his family’s Walker’s Point compound Thursday for a four-day weekend filled with fishing, biking, family events and no official appearances. Beyond his daily intelligence briefing, his only announced business Saturday was getting updates on Tropical Storm Ernesto. He had recorded his weekly radio address, about Hurricane Katrina, earlier.

Acknowledging that Katrina had revealed deep flaws in disaster response and entrenched poverty that had gone overlooked, Bush vowed in the address to “do what it takes” to rebuild the Gulf Coast. “We will stay until the job is done,” he said, “and by working together, we will help our fellow citizens along the Gulf Coast write a new future of hope, justice and opportunity for all.”

Bush will fly to the region Monday to inspect progress in reconstruction. But for this weekend he seems intent on soaking up the waning days of summer. He woke up again Saturday for an early-morning bicycle ride in a nearby federal forest, this time with employees from a local bike shop.

For the Bush clan, this was a weekend of family milestones, with a funeral, wedding and christening on successive days. “It’s a pretty jam-packed weekend,” said one relative who did not want to be named. On Friday, the family marked the death of Grace Walker, the aunt by marriage of former president George H.W. Bush. On Saturday, they celebrated the wedding of her grandson, Walker Stapleton. And on Sunday, they will christen the new daughter of Walker Stapleton’s sister, Wendy.

Stapleton, 29, a real estate businessman in Colorado, is the son of the former president’s first cousin, Dorothy Walker Stapleton, and her husband, Craig Roberts Stapleton, who was a partner of the current president when they owned the Texas Rangers and now is ambassador to France. Walker Stapleton and his father were working out with George W. Bush on Election Day in 2000 when Karl Rove called the Texas governor to warn him he might lose.

After the Secret Service and local police cordoned off the area, the president showed up Saturday for the wedding at St. Ann’s Episcopal Church, an elegant stone building on a promontory overlooking the sea just down the winding road from Walker’s Point. Bush, wearing a dark suit, was accompanied by Laura Bush in a turquoise two-piece dress. The former president came in a blue blazer and white pants while Barbara Bush wore a purple pantsuit. Guests were brought in by tour bus, except for some who walked, including former homeland security secretary Tom Ridge.

The bride, Jenna Bertocchi — yes, another Jenna for the family — wore a classic white gown and veil, while her bridesmaids were in pink. From a distance, news cameras captured the bride walking down the aisle for the outdoor, seaside ceremony. The president stayed for the half-hour service but skipped the reception, aides said, to avoid a security disruption.

The protest earlier in the day did not disrupt the ceremony, but it provoked controversy in this small resort town. Ednamay E. Taraba of Alfred, Maine, summed up one local sentiment in a posting on the Web site of the Portland Press Herald: “I think it is terrible that people are going to protest the President at the wedding, the couple that are getting married have nothing to do with the presidents [sic] policy, they are just a young couple who happened to be related.”

The march, affiliated with peace activist Cindy Sheehan, wound its way with a police escort past this town’s famed art galleries, seafood restaurants and gift shops selling toy lobsters and sweatshirts, along the oceanfront, past St. Ann’s and all the way to the checkpoint in view of Walker’s Point, where they were met by a line of security and turned around.

The protesters carried handmade signs with slogans such as “Stop Killing Our Children,” “Bring Them Home Now,” “We Have Nothing to Fear But Bush Himself,” and “Liar, Liar, World’s on Fire.” In a school field where the group rallied after the march, speakers called for Bush’s impeachment and sang specially written songs such as “Where is the Rage?”

Jeannine White, 55, a schoolteacher from nearby Wells, had a yellow sign hanging around her neck that said, “Bring My Son Home.” Her son, Staff Sgt. Ray White, 35, is serving in Baghdad, now in his second tour, she said.

She had no compunction about spoiling the president’s family time. “I think family is important,” she said, accompanied by her husband, John, 59, a retired carpenter. “But do you know how many families the president has damaged and destroyed? You can’t do that kind of stuff and not have some kind of consequence. This was an opportunity to be close to where he might actually be bothered to read or look at something.”